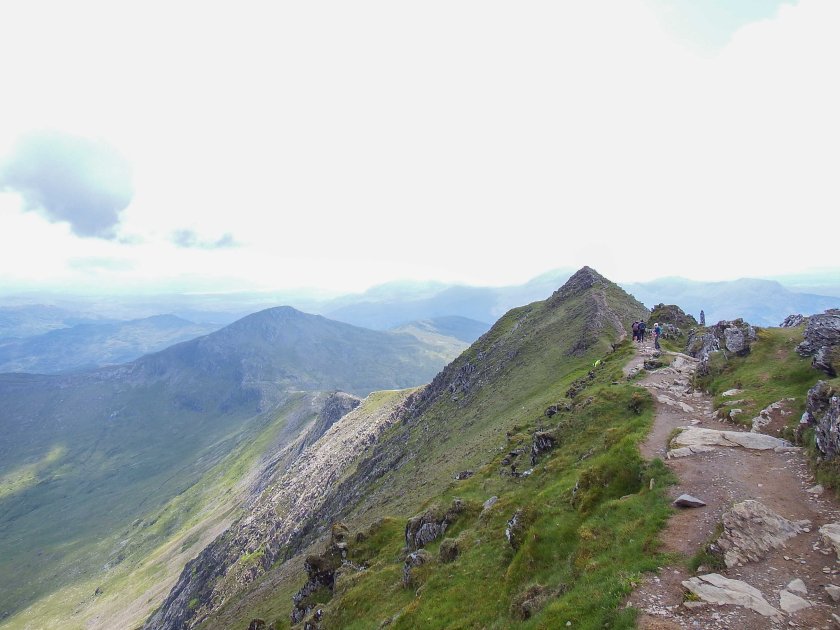 A Peak that attracts many, Snowdon is but one of Wales peaks within Snowdonia National Park. And perhaps a little over rated for the out the gate adventure seeker. But for those who like a little more challenge Snowdonia has plenty more to see then just the main summit.

What an a busy few months!! Markets and vegetables, and vegetables at markets! It has had us dreaming of asparagus and peas, and our ever encroaching trip to Snowdonia crept up oh so fast. Our plans to have the van insulated went out the window. We did however manage to get a fourth seat in to fit the whole crew for an epic camping adventure.

After climbing up Mt Carrauntoohil in Ireland we had set our sights on another peak. Mt Snowdon in Wales, only this time a mid-summer adventure as opposed to mid-winter. With the hopes of actually being able to see something from the top of course.

The trip was planned around a catch-up with Jason a good friend from New Zealand. Who had travelled far and wide. Doing over a month of guided travel through Europe before arriving on our doorstep for a catch-up, before he winged it back home to New Zealand. We were wanting to show Jason the sights of Britain and see some of Wales for ourselves, which lined up conveniently with taking our English Friend Sam camping for the first time. And catching up with Royce’s cousin Emily (another member of our friend group from NZ) who has just started her new job in Wales. This of course made for an amazing laughter filled trip!

Off we set from Evesham with Jase in tow, music blaring and road trip banter flowing as we caught up on Jase’s adventure through Europe. How the trucks are so small and haven’t got the power of the ones back home. (Jason is a truckie by trade and enlightened us fully into the difference between here and home.)  We picked Sam up in Birmingham and stopped for brunch, the first alcoholic beverage was had and Royce then jumped into the back seat as we set our sights for Wales!

In Between the “are we there yet” we made the remarkable step over the English/Welsh border as all the road signs became marked with two languages, and the people and houses became less and less. I was beginning to like Wales already! A few photo stops later and we made it to the Llyn Gwynant campsite, our patch of grass for the next couple of nights. We signed our lives away and groaned at the no music rule. What is a camping trip with no music! Set up tent, cooked a feed and retired early in preparation of our mountaineering the following day.

5.30am the alarm beeped into life and I groaned and grumbled at the airbed that had deflated overnight leaving me cold and achy. Time to get up. Cold breakfast of fruit and overnight oats on a misty and chilly morning we packed heavy with warm clothes, expecting the weather to be cold at the top. We had over the past week had a torrential downpour in England. Thunderstorms and rain warnings were still in place over in the East of Britain. 6.30am everyone up coffed and sooort of awake. We set off to the carpark (the place normal people start). Up the hill we went, a gruelling first section. I discovered I was entirely unfit for uphill walking, and was drenched in sweat by the time we arrived at the carpark. However the sun had come out, the mist cleared and the day shaping up to be bright and warm. So off came a couple of layers, bags were reshuffled, snacks were had and the miners track we went. Following the bus loads of hikers up the Miner’s highway.

The miners track is a well-trodden path as wide as a road, and entirely not our style of trekking. Pleasant, but far too straight forward. Our small group arrived at the big lake (Llyn Llydaw) and the suggestion was made that we should deviate from this track and head up the face to our left onto Horseshoe track. Sam the novice, in her first time camping and first time peak trekking agreed. So we left the tourists behind to climb “straight up the guts.” Sam barreled ahead and I was left feeling extremely unfit. I made it up though and we had smoko on the top of Lliwedd Bach. What a view! We sat with an almost 360 degree view of valleys and lakes on both sides. Well worth the climb! To top it off, at that time in the morning it was just us on the ridge-line. A perfect view as the sun shone down on the sparkling lakes below and a gentle haze lay in the distance. Looking out you could see as far as the Welsh coastline. The bus load of tourists could be seen down below making a more leisurely pace up the peak. And opposite us on Grib Goch we could see a few more early birds with hands thrown in the air having conquered one of the 15 peaks that are within Snowdonia National Park.

Onward we went, up Up UP. Then a bit of downhill (my favourite part!) Then the steep scramble climb up Watkins path. We met with some workers turning the scramble into a path of well laid stones. The foot traffic on the peak also increased, and Jase in his wisdom decided that the path we were taking was not interesting enough. So decided to go full goat and rock climb up the scramble face instead. (He made it without falling off the side of the cliff….. Just.)

We made it to the top! Yay! Except at the top of Snowdon unbeknownst to us sat a train station, café and souvenir shop. The conversation was had earlier in the day, as someone had mentioned it and we had laughed off the idea. “No there couldn’t possibly be a café at the top that’s ridiculous.” Apparently we were very wrong, and so the summit of Snowdon became very underwhelming. As we climbed the last few steps and attempted to try and take a photo, that didn’t container other trekkers, souvenir wielding train trippers, or the few older people hobbling along. Come to see a peak they couldn’t have climbed themselves but were able to get to see none the less. A blessing for them that the Miners that manned the hills once upon a time had put in the train line, so the Mountain View could be appreciated by all.

A few snaps later, in rolled the fog. The temperature dropped from positively balmy, to lets go see what’s inside this train station. I found a patch of floor to eat my lunch before a table cleared for us to sit at. And we gazed out at the damp white mist where an amazing view of the valley beneath should’ve been. Two or three loads of people came and went through the train station. And it became very easy to pick the bedraggled trekkers looking a little worse for wear, from those that had taken the train straight to the top. Scattered among them was the seasoned veterans to whom this was just a gentle walk up the hill for them and there mountain climbing dog.

We dragged lunch out. A little unenthusiastic to go back into the weather. However there is only so much stalling you can do when your only half way through the day. So out we went, and low and behold the fog cleared away and the sun came back. With a bit more spring in our step from the Whitakers chocolate we had brought all the way from New Zealand to keep us going. Down the mountain we went. The original plan was to go back down the Watkins path, but I am not really one for going down the same way I went up. So I made a suggestion that we hook right onto Rhyd Ddu path then onto Alt Maenderyn and then back around onto the beginning of the Watkins path. Jason seconded my plan, and it was done. What’s a few extra miles for a different view and some stunning scenery after all? The temperature increased degree by degree as we began our decent from the razorback ridge. On our way down we met a Canadian gentleman climbing the 3 British peaks and Irelands Carrantuohill all in the space of a week!

Finally back on the highway track that is Watkins path, Jason and Sam zoomed on ahead as Royce and I dwindled taking photos. Because of this the turnoff to circumnavigate the lake to get back to the campsite was totally missed, and we added yet a few more miles to our journey. A bit of bush bashing later we finally made it back to where we started. Over 34 kilometers, more than 40,000 steps, roughly 10 hours and some very sore feet later. We sat ourselves down on the lakes edge and poured ourselves some celebratory drinks, and Royce and I jumped in the lake briefly to cool off. A fantastic end to a long rewarding day.

As always thanks for tuning in I will put out another post to follow on from Snowdon peak. Where we crossed the Welsh/English border 5 times in 2 hours and had fish and chips of the beach of Aberystwyth. And remember go get out the gate and have some free range fun.