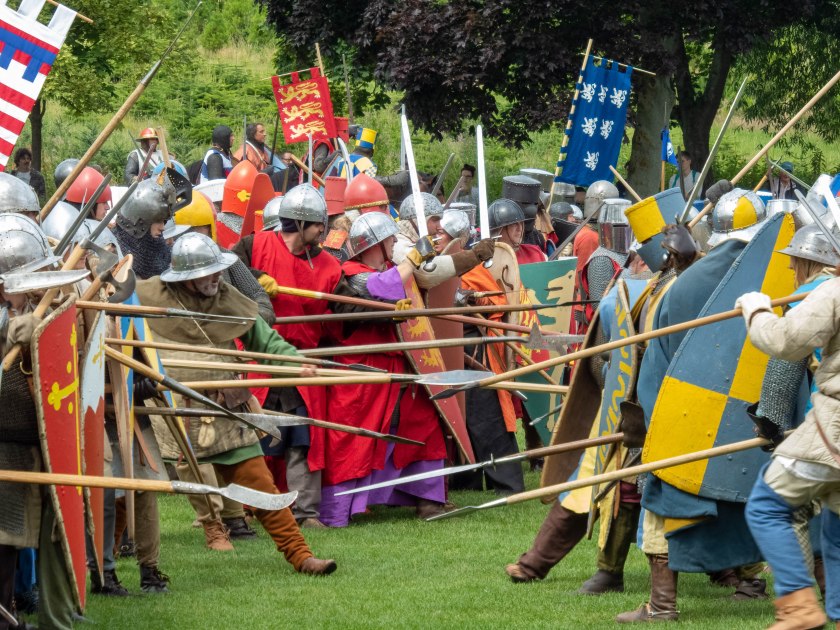 The Battle of Evesham was originally held on 4th august 1265 in which Simon De Montfort, Earl of Leicester, leader of the rebels was defeated by the future King Edward the 1st leading his father’s army. The battle took place near the town of Evesham. In modern times it is generally held on the first weekend of August, renacters from all over the UK come to participate in this 13th century battle.

After paying the typical festival parking cost of 5 pound we parked our van (soon to be home) and entered a medieval world. Once through the normal fare ground crap like spinning balls and spooky trains ect. There was an abrupt change of era. From very modern to 13th century England. We met a lady who was a keeper of ferrets and ran a ferret rescue, hospital and shelter. She was dressed as a wealthy peasant (she had shoes on) and was a keeper of ferrets for the lord of the castle. For 1 pound you could hold a ferret, all donations went towards the care and feeding of the fury critters. Her happy go lucky attitude yet ferocious temperament on the battlefield was infamous among the reanament community.

After a few photos of ferrets and cuddles we headed off down the rows of 13th century tents containing soldiers having lunch, merchants selling wares, brewers with their liquor and we even came across the king! Soon it was time for the battle!

Amongst a flurrying of banners and the blarring of horns the armies marched onto the field of battle supported by cavalry and archers. Arrows were fired, horses charged about and men and woman at arms clashed. The initial contact was very even, however after the rebel king was killed a massacre followed. And so ended a awesome reenactment! Great fun for the whole family. For all the gory details of the historical battle click the link. https://www.battleofevesham.co.uk/The_Battle/History.html

Thank you your views today, please leave a like and a comment. Let me know what you think of my writing ect. The current plan is I am going to write about adventure and activities more and kiwi-shepherd-adventures (Courtney) is going to do cities and travel. Stay tuned for more.

Until then remember: Get out that gate and get adventuring!