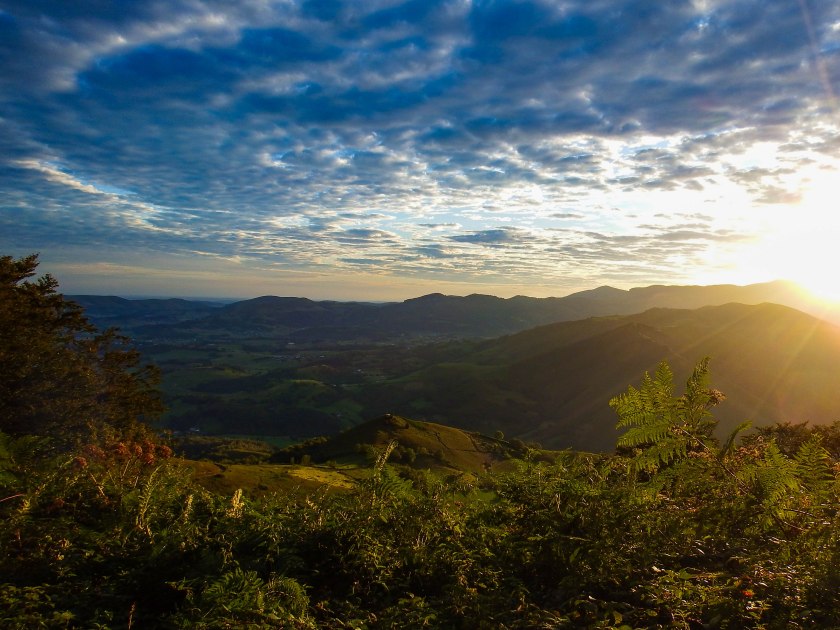 Before the day dawned Royce and I sat together with our fellow pilgrims in a small dining room. In the heart of the Basque region, Saint Jean Pied de Port is one the the official start point for El Camino de Santiago. (The way of St James.) Having explored the beautiful little town the day before we were up early ready to get our walk on. At 6 am we were served a very yummy breakfast of a pancake, toast and homemade jam with coffee and a piece of fruit. We chatted to other yawning pilgrims ranging in ages from early twenties to late sixties and seventies. At 6.30 am the front door was unlocked, we shouldered our backpacks, and along with our fellow pilgrim Yin walked out the door into the dimly lit street for day 1 of our Camino journey.

With full bellies we started out onto the track, through the archway onto the road, and up the hill. Which climbed steadily all morning. As we walked the sun began to peak its way up out of the horizon illuminating the clouds with a brilliant magenta hue that faded to pink, then clear skies for the rest of the day. We took photos as we climbed and chatted getting to know our new companion. Yin had been travelling for some time and had spent time in Australia and New Zealand but was now living in France.

The first 10 km of walking was a steady uphill but not overly strenuous for those of us used to walking and being on our feet. Anyone who hadn’t done any training was huffing and puffing a bit and was advised to take it slow and steady. At around 10 km we came to our first little stop Orson. Which had a very small albergue, toilet (with not a strip of T.P (toilet paper) to be found.) And a restaurant with an AMAZING view of the mountainous valley. The three of us had a snack and a drink of water here before once again shouldering our packs. Yin was struggling a little as her pack was far too heavy for her and the incline increased from here.

The track was wide and well paved, full of pilgrims, the tapping of sticks on the gravel and the crunch of it underfoot. The landscape was a vast mountain range of emerald green hills full of overweight horses and the tinkling of bells from equine and bovine alike. I for the first time understood the phrase; “the hills are alive with music.” It made the walking seem so surreal under the hot sun, the faint jingle of sheep as they grazed.

Royce steamed on ahead, having got talking to another pilgrim Tim, he was talking to him about his job raising fish in Alaska. Yin fell behind and I continued to plod slowly up the hill at a comfortable pace for me. Not used to carrying a pack I couldn’t walk as fast as Royce with his extra few inches of leg.

We crested a rise where a flock of black-faced shaggy ewes were studiously ignoring all the people on their tufts of grass. We had reached the first milestone, the statue of mother Mary sitting at the forefront of a magnificent view of the Basque landscape. The statue sat on a rocky outcrop and below was nothing short of breathtaking. It reminded me so much of home. Of travelling the hills just me, my flock of sheep and my dogs, nothing but the wind, the sun and the hills.

We stopped for morning tea and appreciated our surroundings before carrying on. The worst of the uphill was over. We continued along the pass, definitely a gentler rise up the hill, until we crested the divide between France and Spain. An official imaginary border separating countries and ideals. We had walked to Spain!

The landscape changed entering Spain, it looked less “broken-in.” As we continued through the Pyrenees mountain range it looked more rugged and less forgiving. Not far from lunch time we came across a major water stop and met up with a few people we had chatted to earlier in the day. Here there was a stop with a map that marked the trail onward, but also said there was a high point further up. The track seemed to deviate to get to the viewpoint. Royce and I looked at one another and our minds were made up. The path less travelled it was!

The path on the left-hand side took us above the main trail of other walkers along a 4×4 track where we came to a dead end. The trail for the pilgrims carried on to the right, while ours veered left. There are hundreds of Camino trails across Europe and we weren’t keen on getting lost, so rather than follow the track to the left, we made the call to jump the gate back into the area where the other pilgrims were. But instead of cutting down to them on the track we veered left to the base of a very step incline and one of our cherished “high points.”

We got a sweat up while climbing. IT WAS STEEP! One foot at a time I huffed and puffed, and zigzagged my way up the hill, cursing my lack of adequate fitness. Finally clawing as much oxygen into my lungs as I could I reached Royce at the summit. And boy was it worth it! We had a 360 degree view of the Pyrenees, a spectacular panorama of shades of green and brown. The border between Spain and France laid out in front of us. The wind whipped by us at the peak as we walked along the ridge and found a steel airplane statue embedded in the ground next to a small cairn of stones. Clearly others had been here before.

We decided not to cut back to the track and instead walked the razor back ridge until we met up with the track as it swept round the base of the hill. Back on the track we crested another rise where we would stop for lunch. On our way up we met a man leading his pack laden donkey down the hill. This was definitely rural! At the rise was a hut where we met a Portuguese man who had walked the Camino with his dog more then once and was now walking back for his ninth time. He came across the hut the night before, he found it in an absolute mess and spent the evening and following day cleaning it up. He was asking for donations so he could carry on walking to town to get supplies for the hut. He wanted to equip it for anyone who needed it.

We stopped for lunch. Our previous day’s adventures had included going to the grocery store where we had got fruit, cheese, bread and the French beloved saucisson. So a true hikers meal of hard cheese, meat and bread made up our midday meal.

The sun had climbed high into the early autumn sky, the day was bright and warm with a stiff breeze to keep everyone for overheating. We continued our walk which changed from open rolling hills, to trees and loose stones, as we began our decent we moved down into more brush and trees before emerging at our destination.

The Roncesvalles monastery is a huge purpose built complex, it can accommodate over 200 pilgrims in a night, and is the first major stop on El Camino Frances. The monastery is huge and has not only the pilgrim albergue, but a hotel and not one but two restaurants as part of a larger complex attached to the church. It was in the past a hospital and refuge for pilgrims crossing the treacherous Pyrenees mountains, a place to lie a wary head after a very long day.

We arrived, set our bags down, took off our boots and lined up with the numerous other pilgrims to get a bed and pay for our meal for the night. Accommodation was 12 Euro per person and dinner was 10. Had we brought our own food we could have cooked in the expansive communal kitchen. But with no shop nearby we opted for not having to commandeer our own food or eat from the various vending machines at the kitchen. An important note is that in Spain ‘Cash is King’ and almost all of our albergues only took cash.

We showered, chilled, washed our clothes and hung them out to dry then went over for a drink before dinner. Dinner was another three course meal with bread and wine (mandatory staples for a Spanish meal). We started with pasta and soup, then came the main of chicken or fish and some hot chips (fries). Dessert was ice creams, which was not ideal for me, being lactose intolerant. The meal was basic but delicious and well received after a long day of walking.

Before we headed to bed, we joined a number of other walkers for mass in the church. After we had arrived around mid afternoon a fellow pilgrim had a heart attack and passed away. The paramedics did all they could but couldn’t save him. We went to say our respects. May he rest in peace.

That was day 1, we had done it. We had crossed the Pyrenees mountains and were officially pilgrims, nothing but our backpacks and our feet on the ground. I hope you enjoyed. At a later date we will post a list of Camino tips and a run down of all the places we stayed. Stay tuned for next time where we came across a water fountain guarded by cats. A very Merry Christmas and Happy holidays to everyone. Best wishes for good adventuring weather to all! We are currently on our maiden European voyage for the van. Check out the Instagram page for our latest adventures with Chester the Transit!