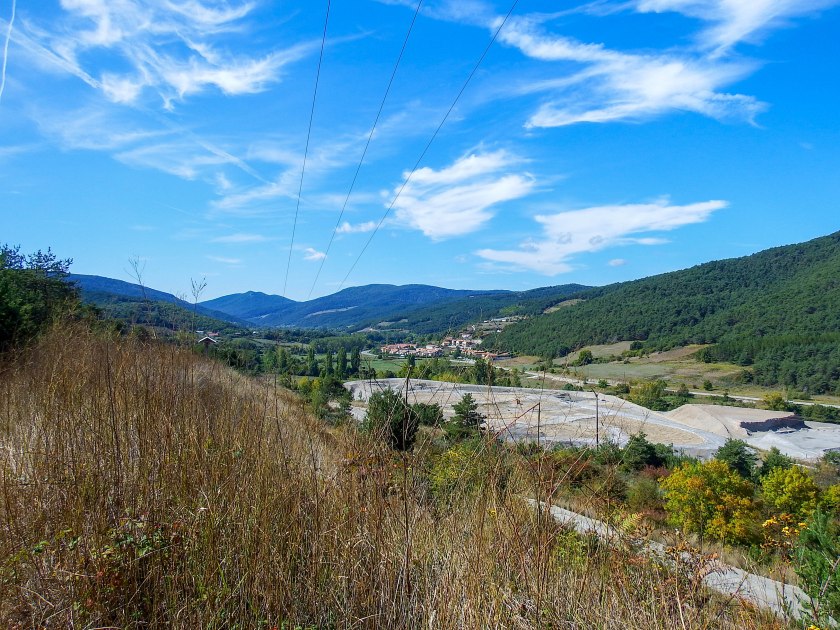 The morning of day two dawned in the monastery of Roncesvalles. We had already decided to get up early and beat the masses. But as 6.30am rolled around we discovered nobody was staying in bed. Check-out in most albergues is 8am but Roncesvalles wasn’t going to let anyone forget that! A chorus started below, singing and jubilant hymns, very “get your buts out of bed NOW!” The hordes of weary footsore pilgrims blinked back the harsh, bright lights as the switches were flicked. Yin had decided to join us once again. So as groggy people stumbled into bathroom cues, we took our leave down the cool stone steps to the shoe locker and got our things together. We had made another friend the night before, Brian from California and he had decided He was going to join our early morning walk. However he took his sweet time getting out of bed, so Royce sent Yin and I into the dark and stayed behind to wait.

Royce and Brian caught up with us pretty quick but then Brian ended up stopping for breakfast at the first little café, so Yin and I carried on, not content to miss the sun creeping above the skyline.

Day 2 gave us an absolutely mind-blowing sunrise! The only downside of walking east to west across the Spanish countryside, is constantly having to look over my shoulder as the golden rays ignited the landscape. The track was easy going most of the day flitting through farmland and small towns. We almost got lost coming into the first town, but were pointed in the right direction by a local Spaniard. Pilgrims stick out just a little!

Unfortunately the morning lulled us into a false sense of security, as the afternoon was a killer combination of sharp inclines steep uneven descents. The pain from the day before became more and more apparent, everything ached! I could feel every stone and pebble under my feet as we walked the stony path. The day was beautiful hot and clear, which naturally added insult to injury on the footsore walk.

The end of stage two puts you in Zubiri for the night, but with almost full and quite pricey Albergues (the municipal had been closed for the sseason) And only being lunch time, we decided to eat and forge on; where we found a fountain guarded by felines.

An array over gatos sat in and around a perfectly placed water fountain and seating area, not a care in the world as they stretched out in the afternoon rays of summer sun. We stopped for a scratch but the cats were having none of it. Content to eye us at a distance and let us only take photos as we filled the camel pack and water bottle. Onward we travelled into Larrasoana our stop for the night in a municipal Albergue.

The Municipal was vastly different from our previous night’s stay. More cramped, 8 to 10 bed rooms of bunk beds with fraying blue plastic covers over the mattresses, and a small fee for the fragile bed covers. There was` barely enough room for bag space, and the only power points were in the main eating area, which had a microwave and a small 2 pot hobs for cooking but nothing else. Hand washing was the go with limited space to hang dry our clothes in the dying afternoon heat. Roncesvalles seemed almost luxurious in comparison, with its clothes spinner to remove the excess water, and paid laundry service for those that wanted it. Of course we could have paid a little extra (12 Euro per person vs the 8 Euro we paid per person) for what would have probably been a much more comfortable sleep with less snoring. (Ear plugs are a must!) But we were pilgrims and an extra 4 Euro is an extra 4 Euro!.. And a potential 2 more vinos.

Larransoana had a small store with bar attached which contained a few meagre bits and pieces, and had one small pub. The pub served a pilgrim menu option at 7pm sharp. The pub had a number of patrons also drinking there, who informed us that Larrasoana was Basque country not Spain! And they spoke Basque NOT Spanish, correcting us while we were attempting to order drinks in Spanish! We saw a lot of political graffiti along the Basque region of the walk, and learnt from locals that the Basque region though not as vocal as Catalonia held similar values of independence. Spain is a big country but its people are divided by many sub cultures, of which those peoples are fiercely proud of. Due to past actions by the greater Spanish political movement and conquerors of the times many of the smaller outlying regions of Spain feel they deserve retribution for wrong doings and hold strongly to their native cultural differences. The Basque region is one of these.

For dinner we went for the pilgrim menu and after all our afternoon chores and a bit of yoga to try and alleviate some walkers’ pains in hips and shoulders. We sat down for a stiff pain curing drink with a few pilgrims.

The three course menu dinner was a jubilant if basic affair, we met new pilgrims and laughed and joked before I retired. Royce and Brian having found a group of wine drinkers who were paying, stayed on. Amongst them was Dan from Cambridgeshire who was also trying to write a blog. (Check out his adventures from the Camino at cliffrat.com) We also met Carlo an Italian wine connoisseur searching out new wines for his Michelin star restaurant. Royce naturally wanted to pick his brains, and time obviously escaped him as he and Brain then got locked out (curfew of 10pm). I didn’t find out till the following morning as I had turned off my cell phone to conserve battery. Royce being the kiwi man that his is had overcome this obstacle by drunkenly climbing through the second story window. (Losing his jandel in the process and I imagine, scaring the bageezes out of fellow pilgrims in the room!) He did this not once but twice! The front door was key locked and Brian in his semi intoxicated stated found this concept to diffuclt at such a late hourhad to be fetched. Royce had to climb back down from the second story (the window into the first story where I was blissfully slumbering was shut.) Collected Brian and dragged him up and through the window as well, with much mutterings of grumpy half asleep pilgrims. What a way to end an evening!

Day two was a bit of a struggle but it was nothing compared to three and four to come! Subscribe to keep up to date and find out more about the rest of our Camino journey! Don’t forget to hit that like button and leave a comment, we love hearing from you!

If you want to see our latest adventures head over to Instagram and follow our current journey in our trusty wagon Chester, for our New Year’s adventures. Happy New Year everyone and bring on 2020 and more out the gate adventures!